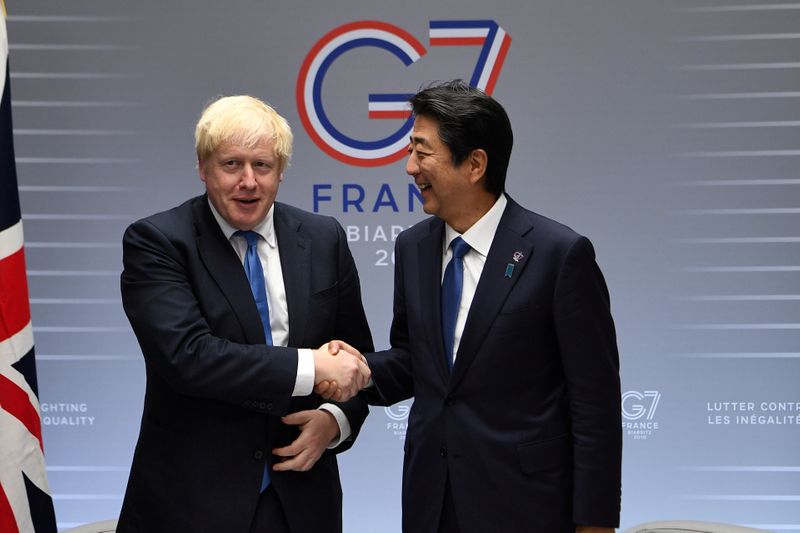 By William Schomberg and Kiyoshi Takenaka

LONDON/TOKYO (Reuters) – Britain secured its first big post-Brexit trade deal on Friday, an agreement with Japan which it hailed as “historic” as it struggles to agree on trade with its closest trading partners in the European Union.

Since formally leaving the EU in January, Britain has focused on negotiating new trade deals with countries around the world although experts say they are unlikely to replace exports lost to the EU if a deal cannot be reached with Brussels.

“This is a historic moment for the UK and Japan as our first major post-Brexit trade deal,” British trade minister Liz Truss said.

“The agreement we have negotiated – in record time and in challenging circumstances – goes far beyond the existing EU deal, as it secures new wins for British businesses in our great manufacturing, food and drink, and tech industries.”

The deal had been widely seen as one the easiest within reach for London, based largely on the EU-Japan agreement which covers Britain until the end of December, when a Brexit transition period ends.

Other negotiations, especially with the United States, have progressed more slowly.

Japanese Foreign Minister Toshimitsu Motegi said the talks had been difficult “but we managed to reach an agreement in principle with extraordinary speed, in just three months”.

He said Japan was aiming for the deal – which would help Japanese manufacturers of train equipment and car components – to come into force on Jan. 1.

Japan has used Britain as a pro-business gateway into the rest of the EU but some Japanese politicians have expressed concerns that a so-called no-deal Brexit might affect this.

Britain said the deal meant 99% of its exports to Japan would be tariff-free, and that it could increase trade by 15.2 billion pounds ($19.4 billion) in the long run, compared with 2018.

Financial services firms, coat-makers and food producers would benefit from the agreement, and it represented an “important step” towards Britain joining the Comprehensive and Progressive (NYSE:PGR) Agreement for Trans-Pacific Partnership (CPTPP) in the Asia-Pacific region, it said.

Big Japanese investors in Britain such as auto makers Nissan (OTC:NSANY) and Hitachi (OTC:HTHIY) would benefit from reduced tariffs on parts, it added.

The deal removes Britain’s tariffs on Japanese cars in stages to zero in 2026, which is the same as in the Japan-EU trade agreement. The issue of automobiles was one of Japan’s main interests.

British business groups welcomed the deal, but underlined the need for a trade deal with the EU.

“We hope the spirit of both ambition and compromise will help land further continuity deals such as with Turkey and Canada, as well as an agreement with the EU, which is of utmost importance to … members,” said Allie Renison, Head of Europe and Trade Policy at the Institute of Directors.

The EU has demanded that Britain scrap a plan to break the divorce treaty signed by both sides in January, but British Prime Minister Boris Johnson’s government has refused. The EU says this could sink four years of Brexit talks.

Japan wanted to reach broad consensus with Britain on trade this week before a change in government in Tokyo, which could have caused the negotiations to drift.