Meatpackers in the Americas accelerate automation after outbreaks, lagging Europe 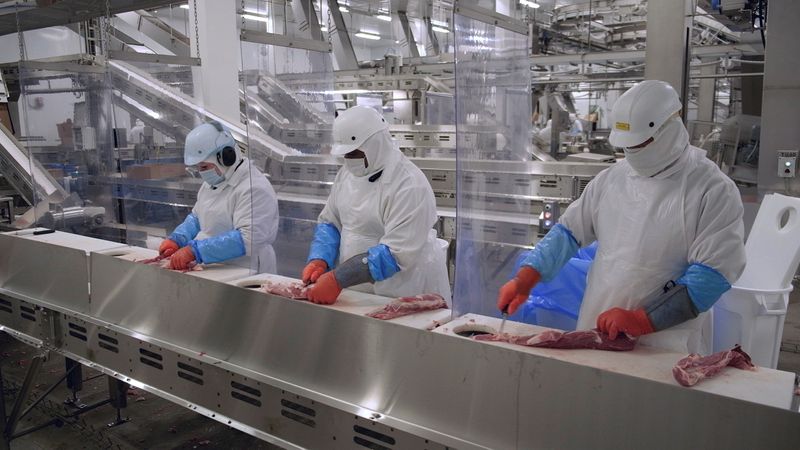 © Reuters. Olymel employees work in one of the companyÕs Quebec hog-slaughtering plants

Mizrahi made plans to install a robotic arm capable of moving packages into larger containers for shipping, allowing workers greater distance from each other. Lesters, a small private company, is investing several million dollars in a five-year plan to increase automation.

"The way we've designed plants has worked up to now – now we need to make dramatic changes," said Mizrahi, president of the 89-year-old company also known for its smoked meat.

The United States, Canada and Brazil, all major meat producers and exporters, have adopted technology at a slower pace than Northern Europe or Japan and lagged other industrial factories in automating their operations. The concentration of COVID-19 outbreaks in the meatpacking industry in the Americas partly reflected its greater reliance on elbow-to-elbow working conditions.

Accelerating the move to automation would increase food security and improve plant safety. But such plans come with costs that some find unaffordable during tough economic times, and workers fear they are being replaced, not protected.

Mayekawa said in a statement that global sales of its chicken deboning robot parts are set to rise from $32 million in 2019 to $45 million this year and $60 million in 2021, including North American sales this summer to Tyson, Sanderson Farms (NASDAQ:SAFM) and Peco Foods.

In Brazil, the country's fourth-largest pork processor, Frimesa, intensified efforts to automate as the pandemic spread.

Plans called for spending 20 million reais ($3.53 million)annually on automation, but that program may now get a 5% annual bump, not including one-off pricey equipment purchases like robots, said Claudecir dos Santos, Frimesa's research and innovation manager. The goal is to automate areas where employees cluster together, he said.

Frimesa's Assis Chateaubriand plant under construction in the state of Parana will include five robots, costing some 500,000 euros ($586,000) each. They will perform tasks including cutting open the pig's chest, eviscerating it and slicing the animal in half.

Olymel LP, one of Canada's biggest pork and poultry processors, had an automation plan before the pandemic forced it to temporarily close a Quebec plant for more than two weeks.

It decided then to accelerate the plan, and intends to use robots to sort meat cuts, pick and pack shipments and stack boxes, said Vice President of Engineering and Project Management Marco Dufresne.

Tyson, the highest-selling U.S. meat company, is making a bigger automation push because of the pandemic, said director of engineering Doug Foreman. "There's a heightened sense of urgency, no doubt about it," he said.

Tyson this summer tested a robot at its Arkansas automation center that uses machine vision to move chicken breasts from a conveyor belt into tray packs for sale in grocery stores.

With retail demand surging, Pilgrim's Pride (NASDAQ:PPC), which is mostly owned by Brazil's JBS, said in July it will use automation to double capacity of a Minnesota plant to produce chicken sold in tray packs. The plant suffered a COVID-19 outbreak in April.

"The outbreaks of corona will put extra spice into the need for automation because the fewer people you have, the less likely you are to suffer from these outbreaks," said Henrik Andersen, chief commercial officer at Denmark-based Frontmatec, producer of automation equipment for the food industry.

Demand from U.S. plants has been particularly strong, Andersen said.

Smithfield automated the work of splitting hogs at the plant a few years ago, eliminating eight positions, he said.

A Smithfield representative declined to respond to Motley's comments.

"We're threatened with automation all of the time, like, 'If you speak up, we'll just use automation,'" Cordova said.

A JBS spokesman said the allegation was "completely untrue."

While the virus outbreak has highlighted the advantages of automation, its economic fallout has conversely limited the scope for major technology investments.

Packers have placed orders with Cantrell Gainco for equipment worth up to $400,000, but pricier projects have been placed on hold in light of uncertainty over how the pandemic will affect cash flow and consumer demand, Cantrell Gainco's Stroner said.

Back in Canada, Mizrahi of Lesters Foods is certain automation is worth the expense.

"When we started to see it hit (other plants), I saw how tragic the impact was on human health.

"The pandemic has certainly accelerated our strategy of planning for more robotic equipment."