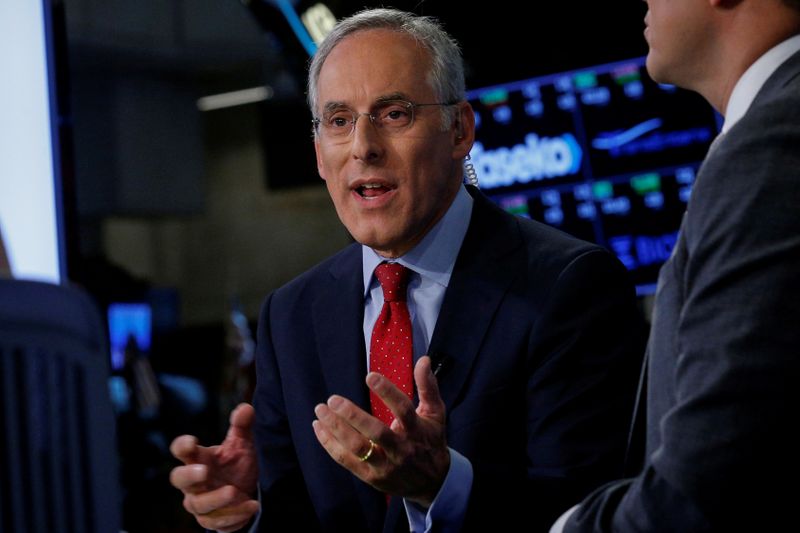 © Reuters. FILE PHOTO: David Kostin, Goldman Sachs chief U.S. equity strategist, speaks during an interview with CNBC on the floor of the NYSE in New York 2/4

NEW YORK (Reuters) – Bank of America Corp's (N:BAC) strategists cut their year-end forecasts for the S&P 500 index twice this year, trailing the U.S. stock market as it plummeted in a coronavirus-induced panic. Then, as the market rallied past those revised targets in the ensuing months, the strategists followed by increasing their estimates.

Now, the bank’s researchers, led by head of U.S. equity strategy Savita Subramanian, say of their year-end price target for the index that the “range is wide.”

They currently are forecasting that the S&P 500 will end the year at 3,250 – a level that is just 50 points below what they had been predicting in January. But the index could end up somewhere between 2,200 and 4,000, depending on the course of the virus and the economy, wrote Subramanian and colleagues in a Sept. 3 note.

The business of forecasting markets is fraught in the best of times. But the year 2020 has left many Wall Street strategists scrambling to make sense of the market, with forecasters surprised by the spectacular crash in late February and March and subsequent rally, according to their research notes and interviews.

As the coronavirus spread early this year, Wall Street researchers generally did not anticipate the scale of the disruption it would cause, according to data from market information provider Refinitiv and a Reuters review of S&P 500 earnings and price forecasts by the six largest U.S. banks by assets. That left them chasing the market decline with cuts in their S&P 500 earnings-per-share forecasts or price targets — or both.

When the downturn in the S&P 500 reversed in late March, several strategists struggled to predict how far and long the rally could go, the review shows.

In a June email to Reuters, Subramanian defended her team’s record and highlighted the unprecedented nature of the crisis. “It is precisely during moments of uncertainty that we should strive to provide investors with our best guess as well as a range of scenarios around that framework,” she wrote.

She did not respond to requests for further comment last week.

Goldman Sachs Group Inc (N:GS), in a response to Reuters in May, said its forecasts are made with the best information it has available at the time and that it noted in research early in the year that a significant change in circumstances relating to coronavirus would alter its forecasts. In response to additional questions from Reuters in late September, the bank declined further comment.

The market’s rebound this year comes as the economy and public health continue to feel the devastating effects of the pandemic. The resulting disconnect between Wall Street and Main Street has investors trying to understand market behavior.

Wall Street research has long been a staple input in investment theses for all stripes of investors, but some say they are relying less on it now.

Rob Christian, co-head of research and investment management at Franklin Templeton’s hedge fund solutions group K2 Advisors, said while he pays attention to sell-side research, his group is putting “less weight on it as there are so many unknowns.”

"In general, they missed it as a group,” Christian said, referring to the pandemic. “We think it is really hard to predict anything now.”

Some of the strategists’ predictions have proved to be correct. JPMorgan’s chief U.S. equity strategist Dubravko Lakos-Bujas, for example, did not cut his initial year-end S&P 500 target of 3,400 during the crash, arguing that the selloff was temporary and policy response would outlast the impact of COVID-19. The target was raised to 3,600 on September 11.

Morgan Stanley chief U.S. equity strategist Michael Wilson and his colleagues cut their year-end S&P 500 forecast the day the market hit its low on March 23. “The speed and intensity of this recession is worse than we expected,” they wrote at the time. But they also said they were “incrementally more bullish,” and by mid-April were raising their year-end S&P 500 target back up again.

It was not bullish enough, however. Early in September, Wilson wrote that investors were surprised by the “persistence and magnitude” of the rally over the past few months. "While we were early to call for a new bull market back in late March, we have to admit we did not expect the S&P 500 to make its way to 3,600 by Labor Day," they wrote in a Sept. 8 note. "We doubt many others did either."

At Goldman Sachs, strategists led by David Kostin cut their S&P 500 2020 earnings per share target three times in 30 days and price target twice during the market downdraft of late February and March. When the market started to rally, they held fire even as the S&P 500 surpassed their year-end target of 3,000, and finally raised it to 3,600 in August.

“The building blocks of that price have shifted dramatically during the past six months,” they wrote on Aug. 14.

Wilson and Kostin did not respond to requests for comment.

Indeed, economic whiplash from the coronavirus and unprecedented government intervention have made the traditional predictive tools unreliable, analysts and investors said.

Earnings per share estimates, a key input in S&P 500 price forecasts, initially lagged the market and then diverged from it as the shutdowns hurt business, Refintiv data shows, stretching stock valuations in ways that some strategists found hard to reconcile.

Between Jan. 1 and Feb. 19, when the market first peaked this year, Wall Street’s consensus estimate for the S&P 500’s 2020 earnings per share was reduced by 0.9%, according to the data.

Over the next month, as the markets fell sharply, the estimate fell 4.3%. Analysts kept cutting estimates as the economy tanked but the market rallied, reducing it by nearly 23% between March 23 and Aug. 25. The estimates have started to increase slightly since then.

Citigroup strategists led by Tobias Levkovich raised their target on Aug. 24 to 3,300 from 2,900, and said the index could hit 3,600 by mid-2021. But they expressed reservations: “We still think the market may be ahead of itself.”

Some have decided to throw in the towel on trying to forecast the market.

Tony Dwyer, chief market strategist at financial services firm Canaccord Genuity Group Inc (TO:CF), said it was impossible to arrive at a sensible number. Dwyer suspended his forecast in March, then reinstated it over the summer before withdrawing it on Aug. 31 as the S&P 500 kept rising beyond his target.

Dwyer added that he believed the overall investment thesis he provides clients is more important “than a made-up target.”