China’s Credit Growth Jumps in August in Boost for Recovery 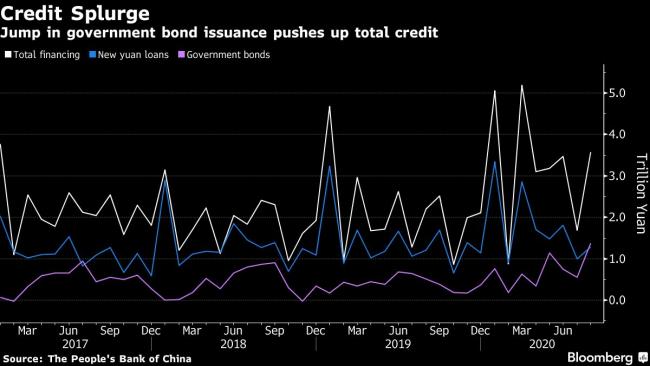 (Bloomberg) — China’s credit growth rebounded to the highest since March, as a surge in government bond issuance and other easing policies continues to take effect and support the recovery.

Aggregate financing was 3.58 trillion yuan ($524 billion) in August, the People’s Bank of China said Friday. That compares to 1.7 trillion yuan in July and the median estimate of 2.59 trillion yuan. August usually sees an increase in credit compared to July.

China’s economy has been recovering and the domestic Covid-19 outbreak is under control. The central bank has been trying to keep liquidity sufficient and the local government bonds sales to finance fiscal stimulus should continue to boost headline credit growth and the economy.

“Aggregate financing will most likely remain strong in September and October due to a large mandate for issuing government bonds,” Nomura Holdings (NYSE:NMR) Inc. Chief China Economist Lu Ting wrote after the data was released. “The strong August credit readings mean that the concerns of a PBOC tightening is overdone, that a rise in bond yields in the past couple of months is a reflection of high funding demand instead of a PBOC tightening.”

Financial institutions offered 1.28 trillion yuan of new loans in the month, slightly higher than estimates of 1.25 trillion yuan. New medium and long-term lending to households and non-financial companies continued to be strong, but overall lending growth was undercut by a fall in short-term bill financing to companies.

That was probably due to central bank efforts to reduce speculation and arbitrage.

Aggregate financing saw a strong reading and funding conditions eased, as seen in companies accessing more credit via loans and bonds. This takes some pressure off the People’s Bank of China to loosen policy — but not enough to shift its stance from an incremental easing tilt.